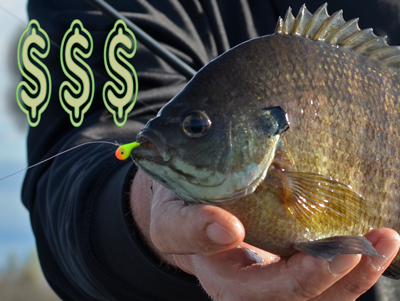 Fishing Article: What’s The Value of a Sunfish? Jeff Sundin

I’m just like you, I wish that I could visit my favorite lake any time I want and catch oodles of big Bluegills. I’d like to bring a bunch of them home too, that way I could fix a big family fish fry for every special occasion.

The problem is that if I fish there too often or bring home too many fish, my favorite lake won’t remain favored very long.
It’s a fact of life and we’re going to have to come to grips with it; as a group, we are extremely effective predators and we’re getting better all the time. We have the equipment, the knowledge, the leisure time and the communication skills to harvest fish faster than our favorite lakes can produce them.

We literally have the ability to love our favorite fish to death and left un-checked, one busy season on a small lake during a “hot bite” can mean the end of its large Panfish forever.

I know what you’re thinking, but no, I am not preparing to go off on a rant. I’m not suggesting that we release every single fish we catch and I am certainly not going to try and bully you into fishing the way I think you should.

No, I actually believe that we can all eat fish, practically whenever we want, as long as we eat the right ones at the right times. Let me just share a few facts and then let’s see if we agree.

Each year, Bluegills and Sunfish are harvested by Minnesotans at a rate of over 15 million fish per year. That doesn’t include Crappies, Perch or other Panfish species, only Sunfish. That eclipses the harvest of our state fish, the more popular and supposedly more heavily pursued Walleye which come in at a harvest rate just shy of 4 million fish. Those numbers break down to a harvest of 3.5 Sunfish for every 1 Walleye. Source >> Minnesota Annual Statewide Fishing Harvest

Wow, that’s a lot of Sunfish in the cooler! In fact, when you think about it Mother Nature has done a fabulous job of keeping up. It’s miraculous that the fish have lasted as long as they have, even after all of this harvesting; we still have lots of Panfish to pursue. 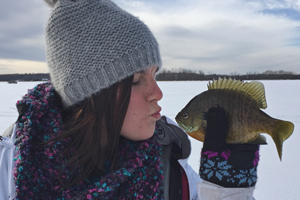 The resource is obviously renewable, the problem isn’t that supplies are not adequate; it is that the average size has declined and as fish continue getting smaller, the problem gets worse.

The solution lies in education; we can solve the problem by harvesting the right fish at the right time. That sounds simple enough, and the idea of “selective harvest” is far from a new one. So why haven’t we already banded together to forestall this scenario from cropping up in the first place?

It’s because anglers have a lot of different ideas about what’s right and what’s wrong. Fishing ideals have been passed along from one generation to another and many anglers’ commonly held beliefs are based on emotion. Often having little to do with fish biology, education has been incomplete, misguided or at times, downright wrong. Stripping away the roughage that lies between fact and fiction is no easy task, but still, it needs to be done.

If you haven’t studied Panfish and don’t understand the biology that creates the right environment for a fantastic Bluegill lake, that’s okay. If nobody mentioned spawning behavior and you’re in the dark about which fish are the most vulnerable and why, don’t worry. Even if you don’t know, don’t want to learn and haven’t the time to be bothered, there’s still something you can do to help; just harvest fewer large fish. That’s right, if you’ll simply consume smaller fish instead, the odds are really good that your favorite lake will benefit.

When articles like this one focus too much on biology, they wind up getting too many facts wrong. That's why I don’t really want to go there, at least not now. Besides, it won’t help if I go on forever with details and your eyes glaze over. You’d probably just click over to some other web page and then I’d never be able to influence you at all.

Just do me a favor, consider this one simple fact and if it’s all you ever learn, it’s probably all you’ll really ever need to know. Big fish help control the population of small fish and that’s good for your favorite lake.

Whenever you release any large Sunfish, for any reason, you’re doing the lake a favor; you're allowing that fish to do its job. Their job is to police the system and help prevent small fish from becoming over-populated. They do this in a number of ways, and that's where we get hung up. But we don't need to wallow in the minutia, just know this, large Sunfish help.

What we want to avoid is over population, this is the last thing any lake needs. When we remove large fish, the population tries to fix itself by generating more and smaller ones and the size structure begins spiraling down. 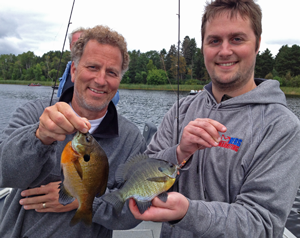 Conversely, whenever you harvest smaller size fish, you are providing more growing room for remaining fish. Having more space allows them to grow at a faster rate and over time, your lake can produce larger fish. Look at this photo and ask yourself, which of those fish and ask yourself which is the preferred fish for harvest?

If you want to learn more about it, you can, there are hundreds of good resources and they explain the mechanics of how this all works in microscopic detail. Either way, you can rest assured; preventing over population, no matter how you do it is one huge key to providing quality fish in the future.

I was A Lucky Kid; I grew up in a family that loved all kinds of fish, even if they were small. My grandfather didn’t care if a sunfish was 6 inches long or not, to him it represented an opportunity, and they were food. We scaled, gutted and pan fried “many a mini” and we loved every minute of it, but when we caught a whopper, we kept that one too.

Remembering those early experiences, watching my grandpa admire a small fish while he declared “that’s a mouthful”, are making my re-training go a little more smoothly. I’ll admit though, I do still struggle with slipping a big sunny back into the water.

The thing is, I love catching big Bluegills and I want to do more of it. Now that I have a better idea of what it takes to make that happen, it’s hard to turn my back on the problem.

I don’t want to give up having a good fish fry, but I don’t have to, I just need to be more flexible. I don’t even have to release every single big fish I catch. I just have to be more moderate; I just have to reduce my harvest of large fish and turn my attention toward smaller fish for the table.

So what's the value of a Sunfish? Obviously a lot, at least for whoever harvested those 15,000,000 fish last year. I know that for me, Sunfish are priceless, pursuing them takes me back to the very formation of my passion for fishing. Who knows, without them, I may have never wound up in the fishing industry at all?

I’m a dreamer and I like the idea of us all pulling together, it sounds like fun. If we all got on the bandwagon soon enough, we could probably make a difference, voluntarily. My love for Sunfish makes it easier for me; I want to do my best to monitor my own consumption. With luck, I might convince a few more folks to join me in re-organizing their priorities too; maybe I can even convince you?

I realize that change comes slow, maybe too slow and chances are good that we’ll be seeing more restrictions coming down the pike. But while that all gets sorted out; there’s no harm in some of us getting started early, right?