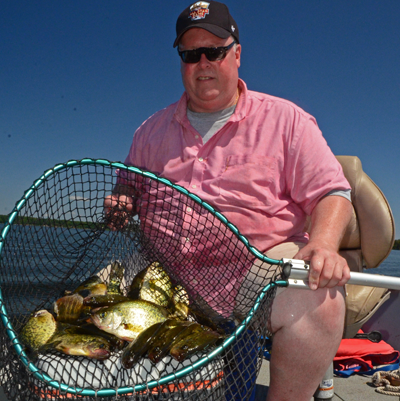 During the dog days of summer, the most fascinating part of fishing is the game of figuring out where the fish are hiding. The game of hide and go seek can get a little frustrating and we don't always win. But when we do win, it makes the fishing trip all the more memorable.

Crappie fishermen usually know where to find ‘em during the spring, many can find ‘em during early summer too. But when the sun is high, the sky is blue and the thermometer reads 85 degrees, it can be a real challenge to figure out where they go to beat the heat.

For anglers, the assumption that Crappies must have “gone deep” to get away from the late summer sun is a common one. And at first glance, it does make some sense that the fish would give up their shallow water haunts in favor of the darkness of deeper, cooler water. But that’s not always how it works; weeds provide lots of cool shade and contain lots of foods for Crappies; and they love to eat.

So if your lake has the weeds, then it’s likely that these are the ideal places to begin your search.

One hang-up for some is that they don’t like fishing in heavy weeds and do their best to avoid them. More often than we realize, we’re driving right past Crappies using these shady hiding spots while we search for fishing holes that are easier to manage. Don’t avoid them, embrace them, weeds can be your best friend, especially when you’re pulling nice Crappies right out from underneath them.

Let’s get started, almost any patch of heavy weeds has the potential to hold fish, but some are better than others. A couple of tricks that I’ve picked up will help you zero in on higher percentage spots and help you catch more fish, more often. 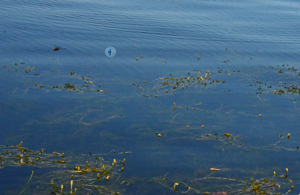 On a recent fishing trip, my brother and I found some weeds, lots of weeds! At first, I tried to figure out how we could fish all of them. It sounded good on paper, but under the circumstances, we would have needed days to cover the territory. It was a slow process; some of the wispy, fine grasses that we tried to fish were so clingy that we needed to remove them after every cast.

Soon, I figured out that I needed a better plan, so I decided to find deep water and then work my way back toward the shoreline, seeking out isolated patches of heavy weeds. It didn't take long, patches of heavy Cabbage (Clasping-leaf Pondweed) formed grass mats and the tops were visible from above the surface. The ones that were surrounded by deeper water had a clean, wall-like outer edge. Placing your bait in the right spot is easy because you can see it with your eyes. By working small pockets along the edges; you can check them out very quickly.

That's what we did; we tossed Whatsit Jigs suspended under slip floats right up to the edges of these heavy patches. Voila, there they were, holding tight in the shade of the canopy. Critical was the importance of getting the bait close to the edge, these fish were not about to swim away from the cabbage to strike. In fact, they were holding so tight that I was able to position the boat right over them. That allowed us to flip the Whatsits into small pockets that we could never have casted into. 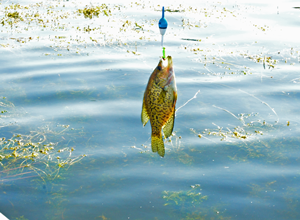 Fishing these isolated cabbage patches is not time consuming at all, if there are active Crappies below, they strike quickly. We were able to pick up a fish or two from each of the main corners and some of the larger pockets (gaps) between cabbage plants. After 10 to 15 minutes, we'd clean out the fish that were gonna respond, then we'd move toward another weed patch.

Equally interesting, but less obvious were breakline areas that contained two weed edges. On the shallow side, Coontail grew thick and formed mats too, they were visible but unlike the Cabbage, not above the surface of the water.

Outside of the Coontail, a second line of weeds grew slightly deeper, forming a gap of open water between the two weed walls. I've seen these weed structures on several of the Itasca area's better Panfish lakes and I've almost always been able to drum up some action on them.

The deep weeds, Bushy Leaf Pondweed I think, were fine and clingy. Using slip floats was counterproductive because the baits would drift into the fine vegetation, forcing us to constantly clean weeds off our hooks. 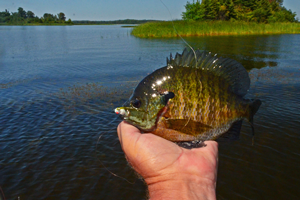 Removing the floats and casting the Whatsits made it easier to fish through the fine stems of the pondweed. By giving our jigs a sharp snap, we could cut the plants cleanly, as if we'd used a weed whipper on them.

The gaps between these two weed lines held Crappies, but there were Pike and some bonus Bluegills too. The presentation I mentioned, casting 1/16 ounce Lindy Whatsits into the pockets, then letting them fall into the weed tops worked like a charm. I like the circular motion that these jigs make as they fall, they sort of corkscrew their way down, providing lots of attracting power.

All things considered, this hot weather weed pattern could easily be ranked among my short list of favorite things to do during the summer. All you need to make it work are weeds, warm weather and the presence of Panfish. It doesn't get any simpler, and it's a great way to beat the dog days of summer!