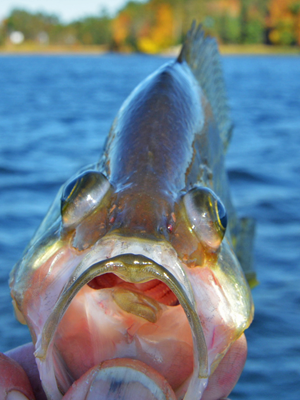 It happens every fall and winter in my neck of the woods. Panfish move into deep water and anglers, including me, move out there to catch them.

For many, gathering fish for a meal is the primary goal and when it is, catching them in deep water really isn’t a problem. As long as we capture what we need; put ‘em in the cooler and head home for the fish fry, it doesn’t matter whether we catch them shallow or deep. In fact you could say that catching fish in deep water isn’t a problem at all.

But releasing fish that are reeled in from the depths is a whole new ballgame. It can be a big problem, especially when the fish are hungry and the angler believes that they're fishing for sport or when they’re “high-grading”, the practice of being super selective about which fish they harvest and which ones they won't.

Both of those practices can lead to the untimely demise of many fish and often times’ number far greater than the angler ever intended or expected to harvest.

It’s a process called decompression and it occurs when any living thing undergoes a rapid transition from an environment of high ambient pressure relative to one where the ambient pressure is lower. The pressure that surrounds a fish in deep water has the affect of packing all of it's vital organs tightly. As the fish is reeled in from the depths, the pressure decreases and those living cells begin to expand. As they expand, injuries occur, minor ones at first, but if the cells expand too much, the injuries can be fatal.

Most folks recognize when a fish has a severe case of it because the swim bladder could come pushing out of its throat or maybe because its eyes are bulging out of the sockets, in cases like that the problem is pretty obvious.

The problem is that there are instances when damage to the fish is far less noticeable and wouldn’t easily be detected by the naked eye. In cases like that, an angler may release a fish believing that it will be fine. But later, internal injury to the fish catches up to it and it dies. 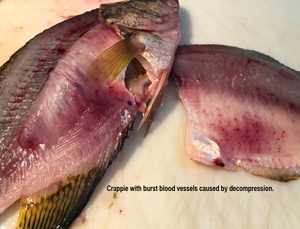 Fisheries Biologist Jeff Reed, MN DNR hooked me up with a study published by the North American Journal of Fisheries Management in 2008. Conducted by Marie-Ange Gravel and Steven J. Cooke, the study focused on a Smallmouth Bass fishing tournament conducted at Rainy Lake.

Generally, the deeper the fish are living, the greater the risk of decompression becomes. But there is no one magic depth at which it occurs and it can even happen to certain fish in shallow water. Still, we know that the fish at greatest risk in our region are the ones who inhabit water that is greater than 20 feet deep.

Anecdotally, I have seen evidence of mild barotrauma in fish that I’ve caught as shallow as 24 feet deep. But for me, the problem doesn’t become extreme until we reach 28 to 30 feet. Any time we catch fish in depths deeper than these, it is because we intend to harvest them. Occasionally, we do catch fish that we deem too small for the creel but are inured beyond saving. In cases like that, I do the only one legal thing that I can do; harvest the fish and count it in my bag limit.

Catching panfish in deep water is not an automatic death sentence. Injury to panfish is not always lethal and some of the released fish do survive. But there are very few studies that shed light on precise panfish mortality statistics. Knowing exactly how many fish will live and how many will die take some guesswork. Extrapolating information from studies related to other species may also be somewhat helpful.

Jody Derks MN DNR’s Assistant Area Manager at the Walker Area Fisheries office shared another study from Rainy Lake. This one; “Mortality of Walleyes Angled from the Deep Waters of Rainy Lake” by Phillip Talmadge and David Staples was published in the North American Journal of Fisheries Management in 2011.

The Rainy Lake Walleye Study concluded that walleyes caught and released in water depths of 9.1 Meters had an approximately 8% chance of dying from the trip topside. At 12 meters, the likelihood of death was up to 18% and fish caught deeper than 15 meters had a greater than 35% chance that they’d been on their last boat ride.

Again, anecdotally, I suspect that mortality rates for panfish caught in similar depths would be even higher than they were for the Rainy Lake Walleyes. But again, I offer no statistical evidence to support my assertion, only my opinion based on what I’ve observed on fishing trips over the past 4 decades.

No matter how you add up the numbers, teaching anglers to be more cognizant about which fish can be released and which ones can’t is a very good idea.

In the Gravel and Cooke study, the authors concluded; "In instances when tournament anglers recognize that they are consistently landing barotraumatized fish, they should consider focusing their angling efforts on shallower waters to maintain fish welfare. Although placing the burden on the angler, this approach is the most prudent given the lack of current options."

Instinctively, I’d already taken that advice and over the past several years, I’ve searched actively for shallower waters where I can pursue panfish. I have found some darn good panfish lakes that don’t have water much deeper than 20 feet. Still, there are lots of good deep water panfish lakes in my region and I didn’t completely quit fishing them I just cut way back on it.

When an angler releases a fish and it swims away, it’s only natural to assume that it will be okay. We know that sometimes they are and sometimes they are not. So the best we can do is it to attempt being responsible about how and why we fish during these deep water periods.

If you’re hungry for fish, great! Go ahead and harvest what you need, even if they’re in deep water. But think about it, once you’ve captured your table fare, you have nothing to lose and everything to gain by moving on to pursue another species or by using your extra time to explore shallower lakes.

Who knows, you might even be responsible for helping your favorite deep water panfish hole survive a little longer.