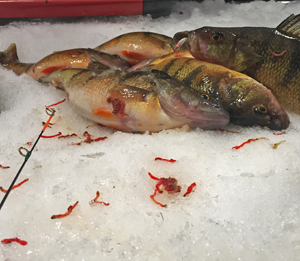 During mid-winter, insects begin attracting Bluegill, Perch and other gamefish into predictable feeding areas. In most lakes, the transition doesn’t go directly from hard bottom straight into soupy, soft muddy territory. Between the two, there are areas of semi-soft bottom content called marl. These precious stretches of real estate provide fish with both food and comfort and give anglers a focal point to begin their search.

Even though I’m not an expert on the substrate lying beneath my favorite fishing spots, I do happen to know one. The conversation we had recently makes a lot of sense, especially when I connect the dots from area fishing reports that come in over the wire.

We’ve all been trained that if we want to find fish, we need to find food. That sounds easy, but there’s food everywhere, so there has to be more to it than that, right?

Insect larvae and invertebrates use soft bottom areas as a feeding ground. There are many microscopic critters make up this portion of the food chain, but among the easiest for anglers to identify are Bloodworms.

Bloodworms are the larval form of the Midge, a flying insect that looks like a mosquito but does not bite. Look close at one and you’ll see why they can’t bite, it’s because they don’t have a stinger. Midge hatches occur several times during the open water season, but right now, they are in their larval, Bloodworm phase of development. At this stage, they are very attractive to gamefish and almost every fish in the lake will eat them; Perch have a particular sweet tooth for them.

Eating decayed material, most of them burrow deep into the softest mud where it’s difficult for gamefish to root them out. At the transition lines between hard and soft bottom, there are areas that remain soft enough for the larvae to feed, but not so soft that the gamefish have problems rooting them out.
The location of marl is not dependent on water depth, they can occur anywhere from the shoreline all the way out to the lakes deepest basin. But there are a few key areas that anglers can use as a focal point of their search.

Mid-lake bars and points that lay adjacent to deep, soft bottom terrain are fairly easy to locate. For most of us, water depths of 20 to 30 feet are very typical; precise depths vary by lake.

Shoreline breaks that fall into deep water are also likely territory for this type of structure. Most often, they lay well outside the edges of weed beds, on flats that taper into deep water. On many of the lakes I’ve fished, typical depths range between 14 and 18 feet of water.

Marl areas occur in shallow water too and when you find them, they can be real multi species hotspots. It’s not uncommon for an entire food chain to set up around insect larvae in shallow water. Larvae attract gamefish, but they also attract minnows and other small fish that call in large, minnow eaters like Pike and Walleye.

Whether you locate these areas by the clever use of gadgetry like underwater cameras, imaging graphs or trial and error is up to you. But figure out where these transitions occur and you'll be building a solid list of high percentage mid-winter Perch and Panfish spots that provide consistent action year after year.

Q&A "Where Are Marl Lakes In Minnesota?" After reading my Facebook post about the article on Marl Transition patterns for Perch and Panfish, Carl Seckinger wrote; "Jeff, where in minnesota is there a marl lake? 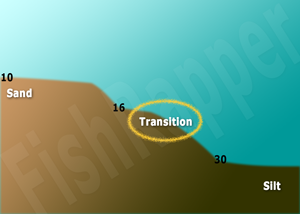 A) Marl is easy to find in Minnesota. I've been on two lakes this week where this pattern is in effect and I’m sure that there are many more.
In layman’s terms, it’s the sticky clay-like soil that we occasionally discover stuck to our anchors after still fishing in shallow water.  Often, there are snails, bits of shell and sometimes even live invertebrates embedded in the sticky mud.

This may be over-simplified, but I’d describe it as a heavier soil that contains a high percentage of clay, along with a blend of light sand and softer silt.
Winnie, Leech and Bowstring are all easy examples of lakes where numerous areas contain this type of structure. Even the rocky Canadian Shield lakes further north have areas of soft marl bottom. An easy place to see it in my home area is along the banks of the Mississippi River. Often referred to as "clay banks", areas of marl can be viewed above the surface during low water periods.

In the also over-simplified image, I’ve drawn a scenario that’s similar to places we fished this week. The depths are typical for several lakes in my area. But remember, this does not represent terrain that occurs in every lake. Areas of Marl can occur at any depth and can be mixed with weedy cover, gravel, clam beds and more.