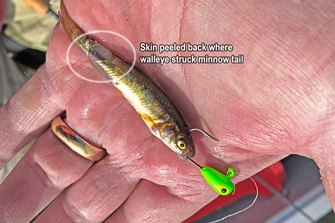 For me, there's one statement that sums up the entire sport of fishing and it was delivered in a movie, by a fictional character, who for all I know, never fished a single day in her life.

In a scene from the 1992 movie White Men Can't Jump. Rosie Perez, playing the role of Gloria Clemente was studying for her appearance on the game show Jeopardy. She attempted to explain some of the rules to her boyfriend, Billy.

That quote tickles me because no matter how silly it sounds; it honestly does apply perfectly to fishing. No matter how much we think we know, we can never quite tell for sure when we know enough to win, lose or tie consistently. In fact, I could use that quote almost every single day in response to situations that occur in my fishing boat. And as it happens, it was the first thing I thought about when I read this question from a reader.

Q) Dave Heck Wrote; "We just finished our three week trip to Sand Lake and Crane Lake and had pretty fair fishing. But at both lakes, the fish were biting extremely lightly. So, I have a question I know you can answer.

It seems they were picking the bait up by the tail and even though I was giving them a little time. Quite often I was coming back with half a minnow or no minnow at all. Sometimes they would drop it if I gave them too much pressure and sometimes, I would get them halfway back to the boat and they'd get off. Probably (I’m assuming) due to a short hook set in the bony part of the upper lip.

Can you give me any tips, or have you written an article that would help me learn the finer points of walleye light bites? I’ve never gigged much in the past and I'm learning more about jigging but obviously have a way to go." - Thanks Dave 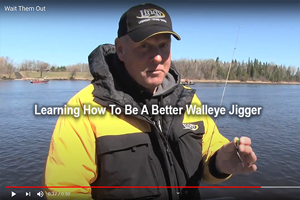 A) Dave, if you want to feel better about missing some of those walleye bites, then watch this video; >> "Wait 'Em Out". In it, I attempt to demonstrate the process of getting a strike, allowing the fish adequate time to engulf the bait and then at just the right moment, setting the hook.

By viewing this video, you’ll also learn that even seasoned professionals, like me, can still lose a fish, even when using the best possible hook setting technique. Sometimes, fish just win the game, despite our best efforts to “out-think” them and sometimes. Which leads to this first tip, possibly my most important one for you.

Unless you know for sure that the fish on the other end of your line is one of quality size, do not allow yourself to worry about missing a hook set.

The lakes you mentioned, along with almost all the Canadian other shield lakes located along the Minnesota, Canada borders have one thing in common; they are loaded with small fish. No matter how good you are, catching those little babies is an extremely hit-and-miss, pun intended, proposition. 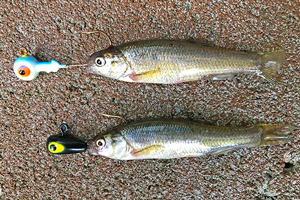 Think about it, we’re using jigs that measure an inch or more and tipping them with minnows that add another 3 to 4 inches to the length. At times, we could be expecting an 8- or 9-inch fish to engulf a 4 to 5-inch-long bait. Of course, we will miss a lot of strikes from those fish because there isn’t enough room in their mouths for the hooks.

I realize that not every fish we miss is a little one, but far too often, I see my customers beat themselves up about missing those little fish. I can see by watching their rod tips when small, inconsequential fish get them all wound up, but often times, the attempt to get a hook set on the smaller, superficial fish only result in frustration and works against the goal of becoming more proficient jig and minnow anglers.

Understand that getting a strike does not cause a “hook-set-emergency”. You have way more time than you realize to assess whether the fish tugging on your line is worth the effort that it will take to catch it. For me, picky, wiggly, weightless feeling fish do not warrant that effort. I reel them in when I must, but I do my best to ignore them in the hope that they will lose interest in my bait and go away. If a strike feels "picky", "wiggly" or rattles the tip of your rod, it is not likely to be a walleye; especially not a good size one.

Missing a hook set on larger fish is a different problem and usually relates to timing.

The fish that I get serious about are the ones that pull slow and heavy. Obviously, the larger the fish are, the greater the sense of pressure on your rod tip will be, but even a strike from modest size fish in the 13 to 14 inch range will feel heavy to the touch. A good demonstration of the sensation can be set up by standing at the top of the stairs with your fishing rod in hand. Having a friend pull gently on your fishing line as they walk down the stairs will mimic the slow, methodical increase in pressure that signals a classic walleye pull down.

When that happens, stop moving your rod tip, take your time, feel what the fish is doing and above all else, maintain neutral pressure on the rod tip. Don’t let your line go slack, but don’t pull it tighter either.

It helps when you visualize it working the minnow into its mouth. Often, walleyes start by grabbing the minnow at the tail, but to swallow it, they need to position it to go down the hatch headfirst. You’ll feel a chewing sensation, or maybe a series of “starts-and-stops” as they chomp the minnow into position. The fish may even drop the bait completely, if that happens to me, my first reaction is to go right back to jigging. They were hungry enough to chase it down, so honestly, 90% of the fish that drop the lure are teased into picking it right back up again. 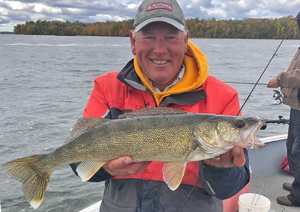 I know I am repeating myself, but this is important.

Watch your rod tip and keep the pressure neutral. If the fish pulls, bow to it, if it moves toward you, reel up some slack line, whatever you do, wait until any sensation of biting or chewing goes away. The time to set the hook comes when the fish just hangs there, seemingly motionless.

During my formative years, I watched the In-Fisherman on TV and in one episode, Al Lindner mentioned something that stuck with me. I’m paraphrasing, but it was something like: “one mark of a great jig and minnow angler is when they realize that a fish strikes, without feeling the need to set the hook too fast.”

At that time, I was interested in learning how to fish with jigs but hadn’t actually done it, but Lindner’s comments made me decide that the time had come.

I remember this like it happened yesterday. I went to the bait shop, picked up a bunch of Lindy Fuzz-E-Grubs and some minnows, then headed for Cokato Lake. At my favorite spot, I tied on a 1/8 ounce orange and brown color, tipped it with a minnow and then cast it toward a shallow rock spine. Bump, bump, I got a hit, jerked on the rod, and missed the fish. After repeating the process several more times, I sat there without a single walleye and realized how low on the learning curve I was.

It was getting dark, but I was so committed to learning how to catch walleyes on jigs that I anchored the boat and spent the night right there. Yes, this is a true story, I slept in the bottom of my boat so that I could pick up where I left off without having to make the drive home and back again the next morning.

The next morning is when I began teaching myself the formula.

Over time, my technique improved and nowadays, despite the video evidence that I'm not perfect, have become pretty good at catching fish on jigs. I’ll wager that if you follow the process laid out here, you’ll get better at it too.

OH and NO, I don’t expect anyone to sleep overnight in the boat like I did, that was silly.