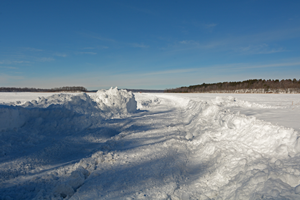 Erin Charlton wrote; Q) "Would you please explain the relationship between the deep snow, lack of sun penetration and what it does to the fish?  Do the unusual fishing patterns relate to low oxygen levels in the water?"

A) Erin, Pinning down the effects on fishing caused by reduced levels of dissolved oxygen in Bowstring is subjective. If you ask the same question every season, you’d likely get a slightly different answer. Ice thickness, snow cover and the number of sunny days all influence what happens under the ice and those conditions change periodically.

One generalization that usually can be made is that the larger a lake is, the less likely it is to suffer the effects of oxygen depletion. Lakes lake Winnibigoshish or Leech Lake for example rarely suffers from oxygen depletion. That’s because these lakes have lots of surface area and vast amounts shallow water. The water being spread out over a large area helps to maintain adequate oxygen levels over winter.

“This winter could be an exception though,” MN DNR Large Lake Specialist Gerry Albert said. “I think it is possible that snow conditions on the surface of Bowstring could be dramatic enough to temporarily shift the lake into the small lake category and there could be some oxygen depletion going on.”

Albert says; "We don't test Bowstring during winter because the lake doesn't have any history of winterkill. A good layman's test of oxygen level might be to see how deep fish are holding. If they are located well above the bottom, oxygen depletion could be occurring at the bottom."

Without testing the water, we can’t know for sure whether the lake is affected or not. But to help answer your question about possible fish locations, let’s assume for now that oxygen levels have been depleted. 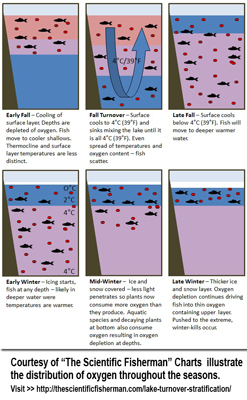 During summer, warm water rises to the surface while cooler water sinks to the bottom. Not every lake forms a thermocline during summer, but in the ones that do, thermoclines occur along the line where warm and cold water meet, forcing the formation a thermal barrier. Because the thermocline forms in water depths that aren’t affected by wind and waves churning from the surface, the barrier remains unbroken until late fall when surface temperatures finally get cold enough to force the lake to “turn over”.

During winter, the process is backwards, the coldest water actually rises to the surface rather than settling on the bottom. This phenomenon occurs because water is most dense at 39 degrees F. That makes water of any other temperature rise up to the top, not because of its temperature, but because it’s less dense than the 39 degree barrier and therefore lighter in weight.

The oxygen depletion in deep water occurs because plankton and small plants begin dying, settling to the bottom as they do. As the decomposing material settles to the bottom, it consumes oxygen so the first water to become depleted is the deepest water. With deep snow restricting the sunlight that would trigger photosynthesis, more and more of the lakes plankton and small plants die off.

As this band of poorly oxygenated water grows taller, fish would be forced to suspend higher and higher in the water column. Because the lakes “freshest” water forms a layer near the top of the water column, finding crappies suspended just a few feet below the ice could be the answer.

Locating fish could frustrate anglers because most of our effort to locate fish, crappies in particular, focuses on searching these deep holes of the lakes main basin. Admittedly, the fish may still be located over the deep holes, but finding these high riding fish is tricky because they’re harder to spot on our electronics. Still, this is one part of the water column that must be explored.

Finding areas that support healthy vegetation could be another answer. The caveat is that the darkness created by heavy snow cover also discourages weed growth and when vegetation dies off, it too consumes oxygen. So unless the weeds you locate are green and healthy, fish are unlikely to be there in large numbers.

Probably, the best possible solution is to temporarily abandon deep water holes and focus on finding fish on the shallower flats. Anyplace where water flow could replenish oxygen has potential to attract fish.

“We don’t know if fish movement toward fresh, oxygen rich water is based on instinct, intelligence or simply coincidence. But fish do have a way of finding comfort, so when they have the option, they will migrate toward areas where the oxygen levels are better;” Albert says.

So while there is no “hard and fast” answer to your question Erin, Oxygen levels do change throughout the winter. The deep snow we have this winter may be dramatic enough to force an unusual, but possible oxygen depleted condition on Bowstring.

There may not be much we can do about it until we see the spring meltdown. Limited by poor transportation, it’s not easy to be creative. But for those who can move around the lake, discovering un-conventional locations will likely be the key to consistent catches.

Remember my comment about lakes with greater surface area supporting better oxygen levels? Here’s an experiment that would help you prove it for yourself.
Let’s say you have 5 gallons of fresh water and two dozen shiner minnows. Put half of the water, 2-1/2 gallons in a deep, narrow pail and the other half in a wide, shallow container. Start the timer and watch how long the minnows in the deep pail last compared to the minnows in the shallow vessel.

The water in the shallower container has more exposed surface area, allowing it to replenish more dramatic the affect will be.