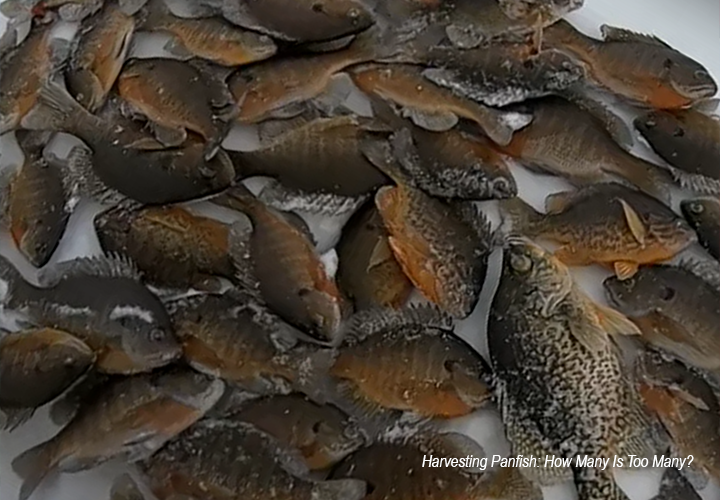 "Hey Jeff, question for you, what do you think happened to our lake? We used to catch panfish in buckets that were full, now when we fish there, it’s hard to even get a bite. Where did all those fish go?”

That quoted conversation is not fictional, it was a real one played out between an acquaintance and me in a gas station parking lot several years ago. The lake is protected from “public” fishing pressure by being completely surrounded by private property. So, the only people who can fish the 66 acre, panfish, bass and pike lake are the property owners themselves, along with any friends and family that are allowed to visit.

More recently, another fisherman, more closely acquainted, invited us to fish on his “private” lake. Over the past few winters, he and his family had been catching crappies by the dozens during the ice fishing season and they could hardly wait to show us how good it was. “WAS”, turned out to be the operative word because by the time we fished there, those big crappies were gone. The 200-acre lake coughed up 1 fish the first time we visited and another 1 on the 2nd visit, a year later. From then on, all we hear are repeated reports about how good the lake “used to be”.

So, when I read John Blake’s email question a few days ago, I sat up straight in my chair. Let’s have a look at the question, and hopefully, some potentially sound advice.

Q) Hi there, my name is John and I live on a small, 25 acre, relatively deep (26 feet) lake on a tributary to the Mississippi River. There are nice populations of sunfish, crappies, a lot of small perch, as well as northern pike and largemouth bass.

My children and I are the only people who fish in the lake and I am wondering how many fish we can keep and still maintain the quality fish present in the lake. We have been very conservative to date, a few meals a year. We have recently found where and when the panfish feed in the lake in the winter. Is there any difference in catch and release mortality in water 20 feet deep or less summer VS winter?
Also, why can we catch panfish all day long in the summer and they only bite around sundown in the winter?

Thanks for your service on the DNR advisory team. Keep your stick on the ice, John.” 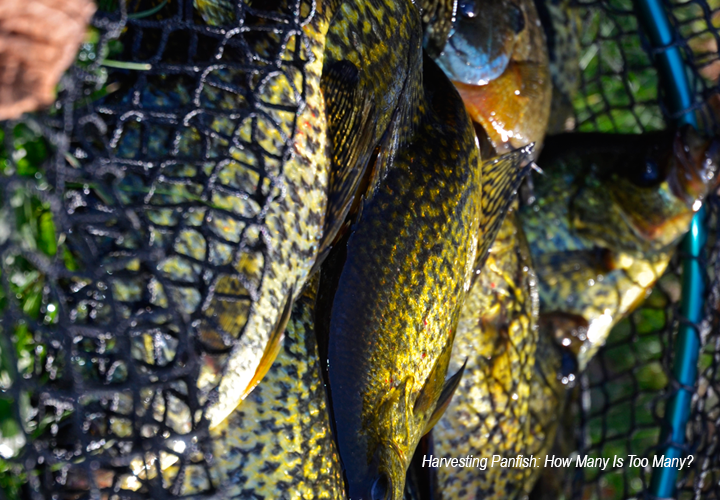 A) John, your question is multifaceted, and the answers are too. But before I tackle any of it, let me applaud you for asking about the parts that you can control. Asking about safe harvest levels BEFORE the fish populations have already been depleted is the exception, not the rule. In my opinion, your conservative approach to harvesting fish probably explains, in part, why fish populations in your tiny lake are still robust.

Going forward, which fish you eat and which ones you should release will depend on factors that vary from lake to lake. So, understand that any answers I can offer are not only subjective, but based on certain assumptions about your lake, based on experience with other waters that I fish now, or have fished in the past. Also, bear in mind that even if you release every fish that you catch, populations in your lake will still be subject to natural population shifts. Natural predation, partial winter kills, variable spawning conditions, even “old-age” will influence populations going forward.

The biggest secret to maintaining a healthy lake, at least in terms of quality size structures of its fish, is living space. The more room fish have, the larger they will grow. Even when food supplies are abundant and habitat is ideal, too many fish crammed into a space too small will never grow to their larger potential sizes. That means preventing the lake from overpopulating is one highly important consideration. Whether from other fish, wildlife, weather or human intervention, the lake does need a certain level of “harvest”. From an angler’s point of view, selective harvest is the best tool we have and if you think about it, the only tool that allows us to control “quality” in any tangible way.

Sunfish spawn both more consistently and more successfully than crappies do. So as a rule, you’d be better off consuming a greater proportion of them. One caveat, harvesting the largest ones usually results in the lake’s population becoming over-populated with small fish and lacking larger, mostly male fish. The best policy is to release the larger ones, primarily male fish, and eat the smaller ones. If you follow this discipline, you’ll be helping ensure that the lake retains a quality sunfish population. 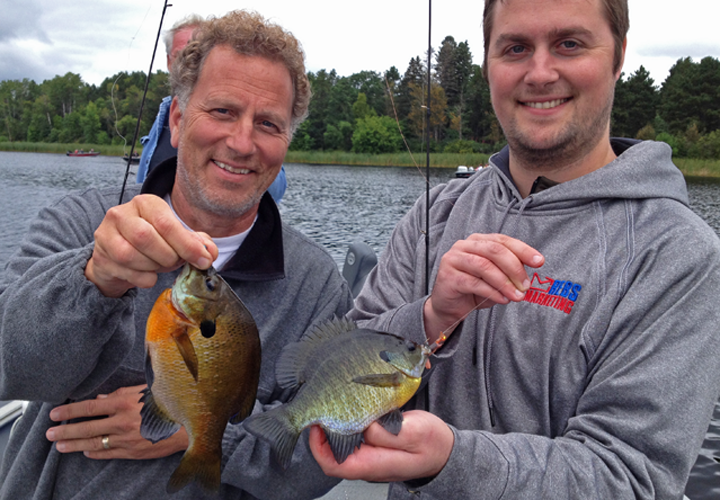 If you want to take selecting which fish to harvest a step further, you can also learn how to identify the sex of fish you have caught. As shown in the accompanying image, the male bluegill (left) is not only larger, but also more colorful than the female fish at right. Many anglers also associate male fish with a bump or knob on the forehead.  Most of the time, that is an effective way of distinguishing the male vs female fish.

The reasons for practicing selective harvest of sunfish are well documented, so in the interest of brevity, I’ll stop here and instead offer the links below to learn more about maintaining quality sunfish populations in your lake.

Crappies are a little different story. They don’t spawn every season; they do spawn whenever conditions are good but will bail out when they’re not. In theory, several consecutive seasons featuring good spawning weather could result in a boom cycle. Conversely, several back-to-back seasons of poor spawning weather could result in a bust cycle. Beyond that, some lakes have more spawning territory than others and this presents another variable. As an angler, you’ll have to attempt to discern where your lake fits in.

Angling pressure on crappie populations is a major contributor to boom and bust cycles too. Crappies are easy to catch and once located, can be fished out of existence in a relatively short time. Even larger lakes with the most reliable spawning records have been overfished numerous times in my region. Mother Nature has a way of filling gaps though, so eventually, another good year class will come along, grow to acceptable size and be the focus of another “boom” in terms of fishing pressure. Assuming the goal is to maintain a consistent population of quality size fish, the conundrum would be to figure out how to balance the harvest with these natural cycles. 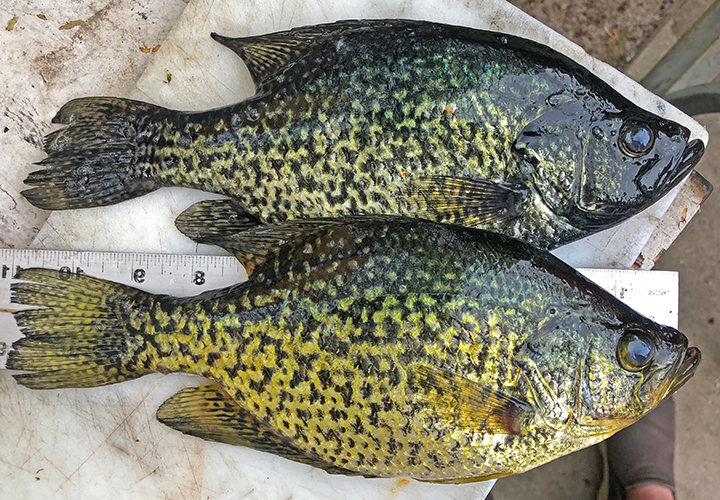 Selecting which crappies to harvest based on sex is not as straightforward as it is with bluegills. However, like sunfish, crappies sex can be determined by differences in coloration. The problem is the differences are only obvious during the spring spawning season. For most of the year, it is very difficult to distinguish between the two. Beyond that, it is the male crappie who stands guard over spawning nests to protect newly hatching fry. In terms of sustaining a lake’s population, it’s unclear whether anglers are better off selecting male vs female fish to harvest.

Personally, my electronics are the most useful tool for keeping tabs on how many fish to harvest from any given lake. Crappies are easy to spot on my graph, so when a given population is high, fish on the screen allow me to assess whether there’s a surplus of harvestable fish. Likewise, a thorough perusal of my favorite crappie lakes that resulted in few sightings, signals me to leave that lake alone. There are numerous lakes in my region that I visit one or two times each year, take my best guess at where they are in the cycle and rotate them in when I think the timing is right.

I know your situation is different, the lake you fish is the lake you fish. So, relating to crappies, I think I’d advise you to stick with your current plan and hold crappie harvest to only a few meals of crappies each season.

Northern Pike, once you learn to use them, is a tremendous resource. My wife loves eating pike, so do I and we’ve learned a half dozen mouthwatering recipes that make delicious meals for us. Without knowing the exact location of your lake, I can’t say which length limits it may be subject to. But I can tell you there are recipes that work great for small ones, others for medium size fish and even some that work well for larger northern pike. Harvesting smaller pike, to my knowledge has never been frowned on by DNR fisheries biologists. In fact, there are now regulations that encourage high consumption of small pike as tool for restoring balance of quality in north central Minnesota lakes.

Bass is often an underutilized resource but do deserve some attention. Large bass are an important tool for maintaining larger size sunfish, and they’re fun to catch, so I’d suggest releasing them. Small bass, however, can and sometimes should be harvested. While I can’t say that they are on top of our list of preferred table fares, we do not turn our noses up at eating a meal or 2 each season.

Your questions regarding water depth, feeding times and seasonal mortality are all related, most importantly to water changes in your lakes temperature and changes caused be them. As cold-blooded animals, fish metabolism decreases during winter, and raises during summer.

When fish metabolism is lowered, as it is during winter, they require less food and spend less time on the prowl in search of food. This helps explain why anglers seldom experience a “hot bite” during the daytime. On the other hand, elevated water temperatures during summer raises fish metabolism and increases the fishes need for calories. They are forced to feed both more often, and for longer periods of time. So, while activity still increases more during the crepuscular periods, they are more likely to feed during the daytime too.

Fish mortality would typically be highest during mid-summer. Warm water temperatures and racing metabolisms make fish more susceptible to injury by being hauled into the boat. Barotrauma is one factor that can raise fish mortality during winter but is mitigated when water depths are shallower than about 30 feet. With a maximum depth of 26 feet, there may be some barotrauma related mortality on your lake but poses less risk than it would on deeper lakes. If you focus on fishing in the shallowest water that circumstances allow, you will minimize this risk.