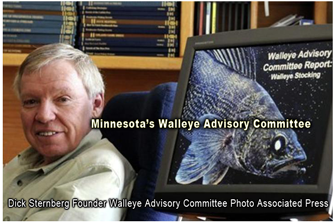 Minnesota’s Walleye Advisory Committee was formed in 2005 and convened their first official meeting on March 17, 2005. The advisory committee consisted primarily of private citizens who shared a common interest in walleye fishing in Minnesota.

A recap report of the meeting from MN DNR's John Guenther delivered to founder Dick Sternberg, outlines some of the concerns that committee members discussed at this first meeting. The report, delivered via email was forwarded to all group members shortly afterward. The recap from Guenther says;

“Dick, Thank you for convening the Walleye Advisory Committee that met March 17, 2005 at Reed's Sports Store in Baxter.

I thought it was an excellent meeting. I say that because the agenda items were good, the discussions were insightful and respectful, and I now have a better understanding of what you and others walleye anglers around the state believe are important issues facing our walleye fishery.

You opened the meeting by saying the anglers around the table “were not stacked decks" but simply folks who are respected in their communities, passionate about fishing, and knowledgeable about walleye. That was exactly the case. Good work on convening a great group.

As you may have noticed, I took notes throughout the meeting. This is what I heard.

I heard support for a statewide walleye regulation that will allow only one fish over 20 inches in possession.

I heard you, Fisheries Operations Chief Ron Payer and I will sit down in the near future to rectify differences in walleye stocking littoral acre calculations (your calculations put the number at about 245,000 acres; DNR staff put it closer to 160,000 acres). I also heard an interest in setting population goals on stocked lakes and increasing stocking quotas.

I heard good debate on a proposed walleye stamp but not a clear decision on moving forward. I heard that if we do move forward we need to develop a mission statement so people clearly understand how and where these dedicated funds would be expended.

I heard good discussion about Dick Sternberg's "Evaluation of the Accelerated Walleye Program from 1998-2003" as well as the related statewide stocking summaries.

I heard angler concern about expanding numbers of cormorants in Minnesota followed by Ron Payer's report that Minnesota, working with federal and tribal governments, intends to implement aggressive cormorant management on Leech Lake this spring/summer as part of multi-pronged habitat, regulation, and fry stocking project to improve walleye fishing on that lake.

I heard interest in further review/discussion of proposed walleye regulation at Red Lake due to the recommended "immediate kill" provision.

I heard a number of general comments about the need to simplify regulations so that casual anglers can keep a few fish to eat and new crops of anglers (we need to increase recruitment) are not so intimidated about doing something wrong or illegal.

I heard about the need to protect in-shore habitat, improving our public participation processes, and being an advocate for the "ordinary angler" who is not part of an elite or politically influential fishing group.

I heard that we should meet one more time before summer and that a date will be set after committee members have reflected on this meeting and discussed how best to utilize our time at the next meeting.

In summary, I heard a lot of high quality comments and issues for us to work on. I am glad we got together because it speaks to my commitment to stakeholder outreach and managing Minnesota's natural resources in a way that is honest, fair, practical and best for the resource. So thanks again, Dick.

Finally, please share this e-mail with all of Walleye Advisory Group members so we can continue this dialogue.”

The Walleye Advisory Committee met several more times as a private group. As Minnesota DNR staff assessed the effectiveness of this committee, they decided that input from the group should a regular and official part of its public outreach. The MN DNR convened its own official council and called it the "Walleye Workgroup". The new workgroup combined private citizens with members from DNR Fisheries Staff who serve as "technical advisors" and guide the meeting agendas.

Achievements resulting from the walleye group’s pilot project led to the formation of more advisory groups. More "workgroups" were established to focus separately on anglers interested in Musky/Pike, Bass, Panfish and Catfish.

Members of all workgroups are volunteers and serve in no official capacity for the MN DNR. Workgroup members meet at regular intervals to offer guideance about public sentiment and angler concerns, but possess no official authority to establish rules or implement official fisheries management programs.

Members of each workgroup select a “spokesman” to deliver reports about meeting discussions and recommendations at the annual DNR Round Table events held each year in January.