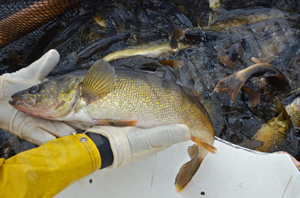 Using All Of The Tools Helps Provide Opportunity For Walleye Fishermen

Eager to point out that most of Minnesota's best Walleye lakes get along just fine without human intervention, Grand Rapids Area Fisheries Manager Chris Kavanaugh concedes that stocking is still a useful tool for providing Minnesota anglers with a broader range of opportunity to catch Walleye.

Lakes with marginal spawning habitat or waters that contain no Walleye populations at all, are typically target destinations for hatchery raised Walleye Fry, Frylings or Fingerlings.

Occasionally, Walleye stocking can also be initiated to assist in the recovery of natural breeding populations in what are otherwise "Good Walleye Lakes" that have suffered some sort of trauma.

As both an avid Walleye fisherman and someone who depends on these Whitetails to make a living, I am by nature, an ardent supporter of Walleye stocking. That said; I like it best when the job is done right and that's why I wanted you to give you a closer look at what it takes to do the job, and do it right.

Imagine waking up for your morning coffee with a couple of thousand Walleyes staring you in the face; we should all be so lucky! For some of the DNR Fisheries Staff, that scene is a reality for a week or so each spring.

Walleyes everywhere begin answering their urge to spawn shortly after ice out, when the water temperatures begin rising into the low-mid 40 degree range. Guided by instinct, they move toward a variety of spawning areas, on a variety of lakes, in this case, Little Cutfoot Sioux near Deer River.

A couple of days after the lake ice free of ice, trap nets are placed strategically along the route to capture fish as they move upstream. Typically the movement occurs primarily at night, but on dark water lakes like Little Cutfoot, fish frequently move into the traps all day long. Soon, the nets are filled with Walleyes that are in various stages of their spawning cycles. 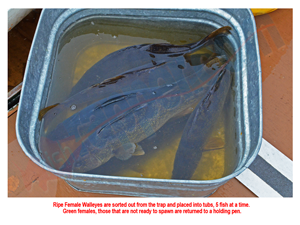 Before the egg harvest begins, Walleyes are sorted; "Green" females who’s spawn has not matured, are placed into holding nets where they are given a few extra days to develop. "Ripe" females are placed in tubs of water, relieved of their eggs and immediately set free to continue upstream.

Male fish provide the sperm, AKA Milt that fisheries staff uses to fertilize the eggs. Timing to get the eggs fertilized is critical because the milt is only viable for about 15 seconds or so.

The fresh eggs have their own sticky stuff built in. Out in nature, ithe tacky surface would help secure the egg to a stone or small rock and help prevent it from being washed away in current. At the hatchery, the last thing they need is for the eggs to be sticky because they would clump togther, making it difficult to keep them properly supplied with oxygen.

So as soon as the eggs are fertilized, they get a nice mud bath. Watching those nice, freshly fertilized eggs going into the mud doesn't look very appealing, but it's an important step in the process. After the mud bath, eggs are rinsed in fresh water, leaving behind eggs that have a light coating of mud adhereing to their surface. This allows the eggs to get plenty of Oxygen as the float freely in temperature controlled containers at the hatchery. 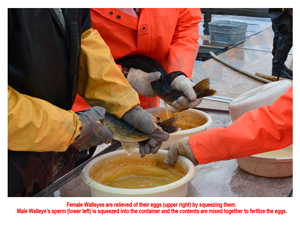 The volume of eggs are measured by the quart, each quart of eggs represents about 100,000 Walleye fry. The need for eggs varies from year to year, for 2015, the time of this writing; the Cutfoot Egg Harvest is scheduled to provide about 1400 quarts of each to satisfy the demand.

Do the math, which means that during the next few weeks, this little operation has the potential to hatch upwards of 140 Million Walleye fry. Now we all know that not all of those fish will survive, but think about it, even if 10% of them do, that's 14 million, and that's a lot of fish, probably more than I can catch in the whole season!!

There's no arguing that we're lucky that most of our lakes do such a great job of naturally providing Minnesota fishermen with opportunities to bag some Walleyes. In my view, we're even luckier to have the ability to create added opportunity; places to fish that couldn't be places to fish without human intervention. That gives all of us more to do, more to fish for and more to be grateful for.

I don't have to go very far out of my way to cite an example of where these stocked fish have benefited me. Pokegama Lake in Grand Rapids is one of the lakes that would likely not have a fishable population of Walleyes without stocking. Yes, that's right, even though the lake may have a handful of native fish, the lion's share of this lakes Walleye were dropped in by the DNR.

I am especially grateful for the Grand Rapids Fisheries folks who stocked the Walleyes in Pokegama because without that effort, I would never have caught this one; Thank You! >> Click to View One Stocked Walleye.