On January 30, 2019 Elliot Nelson wrote; "Good morning Jeff, I came over from Green Bay and visited Minnesota to ice fish last weekend. When I bought my fishing license, they asked me if I wanted to buy a "Walleye Stamp". I never have before and really didn’t want to spend the extra $5.00. But I started wondering later what the stamp is used for and if it’s a good investment. What’s your opinion, does buying the Walleye Stamp actually help anything? 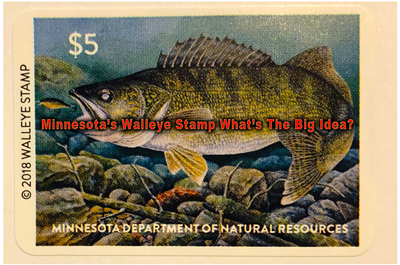 A) Elliot, The original idea for Minnesota’s Walleye Stamp came about during discussions with members of the original “Walleye Advisory Committee”. The committee was formed in 2005 by Dick Sternberg, along with a group of avid anglers, I among them, who shared a common concern that walleye fishing in Minnesota was in a state of decline.

The group’s goal was to bring about changes in walleye management that we believed would lead to the restoration of “good” walleye fishing in lakes that had suffered declines for a variety of reasons. Sternberg, a fierce advocate of walleye stocking compiled factual data that showed Minnesota lakes could support more walleyes than the DNR was stocking.

The subject of money or the lack of it always comes up whenever discussions like these occur. It’s expensive to stock walleyes, about $1.00 per adult fish and the question was where will the money for increased stocking come from?

The idea of establishing a voluntary walleye stamp came up in about 2006. Proceeds of the stamp were to be devoted entirely to walleye stocking. Further, the original intent was that these funds were to be used for stocking over and above the levels already being accounted for within the ordinary fisheries budget. The voluntary stamp would provide guys like me with a way to “put our money where our mouths are”, if we believe in walleye stocking we can pay, and if we don’t we can just say no.

I support the program; I buy the voluntary walleye stamp for myself every year. But I get one for my wife too and sometimes, I’ve even bought a few extras to pass out. For me, it’s a no-brainer, I get a lot more value out of Minnesota’s walleye population than most folks do and I’m willing to pay extra for that privilege.

But I’ll take the discussion even a step further; I don’t think the funds from the walleye stamp only help walleyes. I believe that walleye stocking is also one the best way to maintain healthy populations of almost every gamefish species in Minnesota. Let’s say that MN DNR were to manage for the highest possible walleye population in any lake that will support them. Would that not take some of the pressure off of other gamefish species that are in those lakes?

When walleye fishing is good, crowds form and there’s a reason for that. Most folks who fish in Minnesota will pursue walleyes whenever they believe that they’ll have a good chance of catching them.

When walleye fishing gets tough though, folks diversify. Most folks would rather pursue the next best available species, one that offers good action and/or good table fare. Rather than struggling through a tough walleye bite, they will simply switch their pursuits to a secondary species.

In my own business for example, I’d estimate that about 90% of my customers show a strong preference for walleye. If walleye are available, then that’s what we pursue first.

You and I both know that we can’t have great walleye action on every single trip, so sometimes I suggest an alternative. There have been countless occasions when I’ve taken my customers to a good Crappie, Perch or Bluegill bite simply because the walleye fishing on their target lake was slow. On those occasions, the availability of reasonably good walleye fishing would have saved the lives of other fish, at least temporarily.

My view is that the more often we can target walleye, the less often we pressure secondary target species.

Think of it this way, Minnesota has a state fish; it’s the Walleye and we already have an excellent infrastructure for producing and stocking them. Why not double down and utilize both public and private resources to produce fry, frylings and when required, fingerlings. Putting the most resources into programs that can be run most efficiently helps free up time and money. Game species that are more problematic to manage get an automatic boost. Not because we did something special or becasue we managed them better, nope they get a boost simply because of reducing pressure on them.

I think that's a good idea.