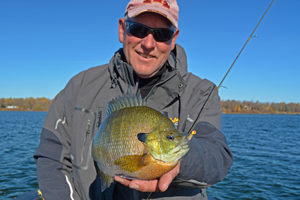 Sunfish, Minnesota’s most heavily harvested species won’t be getting much protection, at least not over the short term. That’s the upshot of the December 2018 session with the MN DNR and its panfish workgroup.

The workgroup, volunteers who collaborate with the MN DNR to discuss issues affecting panfish in Minnesota, meet with DNR fisheries staff regularly. The DNR provides technical support to assist group members in learning more about what makes panfish tick.

The evidence they've provided is clear; Minnesota’s average size bluegill continues to get smaller. At the same time the average size has declined, overall populations have risen. The result has been that we now have more lakes where catching small, stunted fish is becoming the norm and catching larger fish becomes more challenging every season.

The trouble is that many of us have over-emphasized the value of harvesting large fish. Because of their unique spawning behavior, large fish must remain present in a lake for the system to flourish. Once the larger male fish are removed, it is extremely difficult for the lake to stage a comeback. There's a lot of information on that subject available, if you'd like to dig deeper, you may want to start right here >> What's the Value of a Sunfish?

It’s fairly obvious that in many instances the situation could be reversed. A series of presentations by fish biologists, DNR field staff and Midwestern bluegill specialists have demonstrated that lakes with special bag limits to restrict the harvest of bluegills can and do return to producing large fish within a few years after protections are implemented. That's why members of the panfish group have become convinced that large, male bluegills definitely do need additional protection.

The painful part is that the best way to mitigate declining size structure would be through the implementation of very restrictive bag limits. Biologically, the ideal number is probably about 5 fish; that appears to be what it takes to bring back quality size fish. It’s been done on a number of Minnesota lakes and in most cases it’s worked. The average size of sunfish in these “special regulation” lakes definitely does improve. That’s why the group’s primary focus has been on bag limit reductions.

Cognizant of the uphill political battle that could result from such dramatic changes, discussion of 5 fish bag limits were abandoned early in the process. While some of the more palatable bag and size restrictions may be less effective, the workgroup acknowledged that compromise would be the only way to garner public support.

After recommending that the DNR move forward with some kind of statewide regulation change, the group began brainstorming scenarios, ones that were thought to be fair compromises. Any idea that might be easier for the public to swallow was investigated and a short list of options began to take shape.

To gauge public support for any potential change, the DNR created a couple of surveys and presented them to a sampling of licensed anglers.

What the surveys show is that while Minnesotans do indeed share a desire to catch larger bluegills, they do not appear willing to accept reduced bag limits to get them. In 2016, 65% of those surveyed indicated that the state’s 20 sunfish bag limit is “about right”. Anglers answering that bag limits were either too high or way too high constituted only about 30% of the total in that survey.

In the 2018 Fulton Survey, angler support for keeping the current 20 fish bag limit was nearly 50%. Combine that with almost 27% of those that were neutral to the idea and you can see that the group of 25% who indicated that a change is needed have been squarely outnumbered.

Look at the accompanying chart, you’ll notice that any notion of a 5 fish bag limit never even made it onto the survey. Even the less restrictive options, believed to be more palatable scenarios were met with disapproval ratings of 40% and higher.

Long story short, while biological research clearly shows that lumpy headed, bull bluegills would surely benefit from bag limit reductions, the DNR is unwilling to risk moving against public opinion. For the moment, any plan to propose statewide restrictions on sunfish bag limits have been tabled.

“I’m really disappointed”, said Dave Thompson owner of Fisherman’s Village Resort near Battle Lake, MN. One of the founding members of the original “panfish committee” formed nearly 2 decades ago, Thompson knows the history. “For 20 years we’ve been working toward a goal of doing something to protect the quality of sunfish in Minnesota. After all that time, we haven’t had the impact to implement a change.”

Ed Fussy, owner of Pimushe Resort in north central Minnesota added; “The clock is ticking, the longer we wait, the harder it will be getting Minnesotans back into the great Bluegill fishing we used to have.”

Fussy, another one of the original panfish committee’s founding members has seen firsthand how special regulations can bring big bluegills back to a lake that’s been fished hard. His lake, Pimushe has a 5 sunfish bag limit right now and it has worked. Prior to the 5 fish bag, a special 10 sunfish bag limit had been tried, but it didn’t really get the job done. “The ten fish limit may be a maintainer, but the 5 fish limit is a fixer”; Fussy says.

It’s clear that if we really value the concept of “quality” fishing for sunfish in Minnesota, something will need to change. But even though there is significant support among avid panfish anglers for changing sunfish regulations, it’s hard to see bringing the masses on board for anything major.

Dave Weitzel, Grand Rapids Area Fisheries Supervisor co-chairman of the panfish workgroup’s technical committee offers this; “Just because we won’t be introducing a proposal for statewide change doesn’t mean that the work is over. The knowledge that we’ve gained over the past 3 years would never have happened without this group. We’ll still be striving for improvements on a lake-by-lake basis, there’s still a lot we can do.”

Anglers could probably self regulate if they're willing, we could simply volunteer to place greater value on eating smaller fish and releasing all but a few large ones. That's easier to say than it is to do beacuse it goes against human instinct. But that's our new job, the mission of this panfish workgroup has changed. Those of us who advocate for bigger, better sunfish will have to focus on leading through education. Taking our case to the people and trying to move the needle ourselves is about the only thing we can do right now.

The facts are out there and the case for changing how we approach the consumption of sunfish is an easy one to make. We'll just need to put our best foot forward and teach folks that they really can have their sunfish and eat them too; we just need to be more careful about which ones we take and which ones we leave behind.

Oh, and by the way, if you're an advocate of preserving and improving the quality of sunfish in Minnesota, do me a favor and join the discussion. You'll find a link to this article on our Facebook page. Just follow the link >> "Fishing Reports Minnesota" and share the post with your friends.

"I would be a bit cautious about saying that the average size of Bluegill has declined (at least in recent years) because our (DNR) statewide trap net data suggests that it has actually stayed around 6 inches since the early 1990s, despite going from a 30 fish limit to a 20 fish limit.

A more accurate statement would be that size quality declines have been documented in many Minnesota lakes and these declines are generally caused by anglers harvesting the largest sunfish.

I would also acknowledge that, in addition to the social data, the DNR felt that, although regulations were generally successful when applied in specific situations, questions remain about the biological impact of regulations on a wider range of Minnesota lakes so more studies are needed."