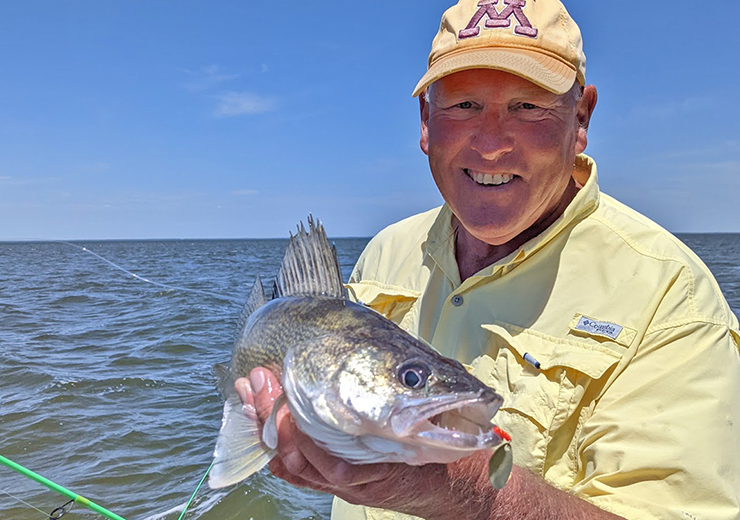 "Water levels are still high on Upper Red Lake, I think about 2 feet above what I'd typically observe at this time of year. The surface temperature remains cool too, on Tuesday, they ranged between 66.5 and 67.5 degrees most everywhere we stopped.

The cool water temperatures heightened what I’ll call the “late-day walleye bite effect”. At least for me, this pattern of starting slow and building to a crescendo is perfectly normal on Red Lake and occurs almost every time I go up there. For the first couple of hours yesterday, there wasn’t a lot happening, but as the sun warmed things up, the walleyes began to move. By about noon, the action was good and would have gotten better if the wind hadn’t gone so topsy-turvy.

I’d been staying in contact with my friend Justin Wiese, he was lending a hand with “Carl’s Cronies”, a 6-man group that requires a second guide boat. It was ironic that at one time, I called while he was busy converting his crew from spinners, over to jigs and minnows. At the same exact time, I was in the middle of converting my crew from jigs and minnows over to spinners. Great minds think alike I guess, he’d reasoned that the slow morning action was because the spinners weren’t producing. My reasoning was that the jigs weren’t working. Soon though, we’d learn that both presentations worked just fine, the fish simply had slept in later than usual.

For an hour or two, the winds were calm and keeping a consistent trolling speed was easy. We were on a roll with the Little Joe Spinners, fishing to me, seemed to be getting easy. Then the wind unexpectedly turned direction, blowing into the north shore from the southwest. The whitecaps forced us to abandon trolling the spinners and begin drift fishing with jigs and minnows instead. This was working fine too and after a short period of adjusting to the new conditions, the fishing seemed to be getting easier again.

The next thing that happened was another wind switch, this time it blew from the north, making ours the calm side of the lake. So, after a decent drift or two, we found ourselves sitting in flat seas, looking for a new game plan again. Somehow, that final wind switch did the action in for us and that was the only reason we were a couple of fish short of our limits when we left the lake. I think that if we’d stayed longer, we’d have gotten another chance, but with a long drive and another fishing day ahead of us, we opted to get off the lake instead.

The key depth range for us was about 5 feet of water and right now on the north shore, that occurs right up against the bulrush patches. Most years, those bulrushes are in much shallower water, so fishing in and around them isn’t really “a thing”. This year though, they are holding fish and if you recall, I mentioned catching pike in them a few weeks ago. There were still pike in the area yesterday and Justin bagged a crappie there too. Some perch, not too big, were drifting around in the area as well. Sheepshead, to my surprise, were practically non-existent, we only caught 1 of them, Justin reported catching 4 or 5 throughout the day.

I’ve been following some conversations about the size of walleyes folks are catching on Red Lake this summer. The trend has been larger numbers of lower quality fish are found on the south and east shorelines. Lower numbers of higher quality fish are located up north. So, if you’re willing to trade grinding away at a slower pace to harvest some larger fish, fishing the north side might be a good idea. If you want to stay busier, fish the south and or east sides.

Obviously, the wind dictates part of your decision too and yesterday, it did mine. I’d hoped to look at some “fresh territory”, but those whitecaps I mentioned slowed me down in that regard.

A few weeks back, I called Red Lake “good enough to be called good” and I still see it that way today. The action will keep you interested, but likely will not be intense. If you work at it, there will be some very nice size fish in your larder too. By days end, we managed to harvest 14 walleyes, most of them ranging in size from 15 to 18 inches. There was a 1 21-inch fish, along with 1`14-inch fish in our bag too. Spinners vs jigs was a 50/50 split, use whichever presentation you love the most. Crankbaits, if you love those, will probably work too, but we didn’t see any evidence of that yesterday." 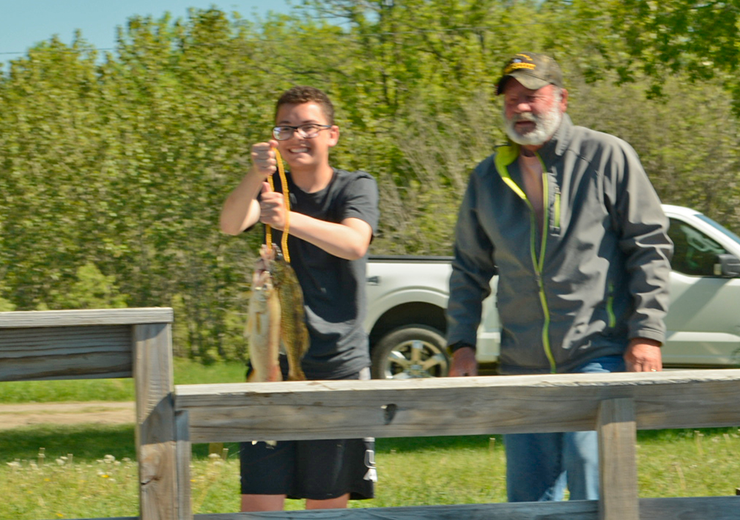 We’d all heard that fishing on the big lake was good, but windy, unpredictable weather had kept me away this spring. That finally changed yesterday when Bill and Roger hopped in the truck and said, “let’s go to Red”. I checked the weather forecast, which appeared to be decent enough to take a chance. Cautiously, I gave my nod of approval, and we were on our way to Washkish.

We couldn’t help but to be optimistic about fishing on Upper Red Lake because as soon as we launched the boat, we’d already seen people catching fish. That’s right, fishing right there in the Tamarack River, from shore, the young man you see pictured at left was already close to his walleye limit before we ever pulled our rods out of the locker.

Whenever possible, I fish the south and east sides of Upper Red, I just like it on that side. But yesterday, there was a wind predicted, Northwest at 10 MPH, with possible stronger gusts and that influenced my thinking. So, I drove up the north shore to add a measure of protection from potentially rough seas. At our first stop, I noted the surface water temperature, 65 degrees and that reading remained fairly consistent from spot-to-spot.

Water levels, like most everywhere in north central Minnesota, are high at Red Lake. The breakline which typically occurs between 3 and 5 feet on the north side was deeper yesterday, 5 to 7 feet at the drop off. The extra water levels were confirmed when I explored shallower water. In the 4-foot range, I found myself motoring into the submerged bulrushes which would typically occur in the 1-1/2 to 2-1/2-foot range. There was no sign of that vegetation above the surface and no sign that any bulrush plants beginning to turn green. I moved back out of the bulrushes, stopped at 6 feet of water, and began back-trolling. 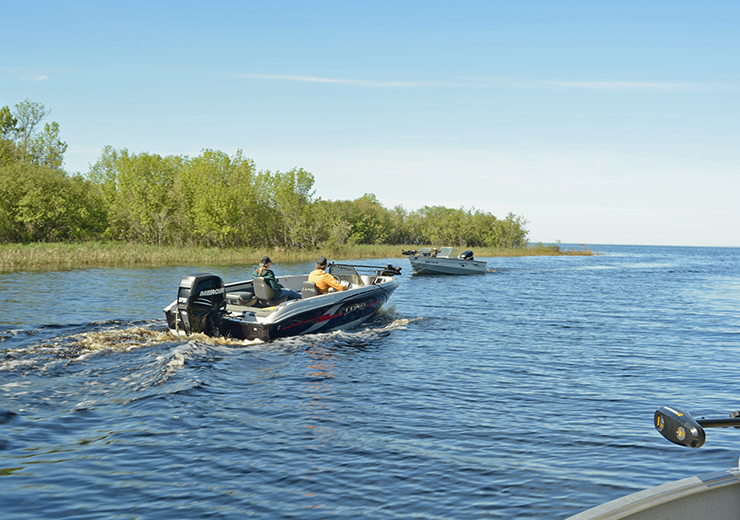 We’d only been on the lake an hour and we’d already caught our limit of rocks. So. Despite believing that there were more fish on that rock pile, I moved back to the shoreline. Not long after that, a brisk wind developed, and it lasted long enough to drift about a half mile. That drift was our most productive in terms of combined action and average size.
Maybe drifting simply allowed us to cast away from the boat to explore a broader range of depths. Or it could be because I never nailed the best trolling depth, or boat speed, or whatever? But the fish, in my mind, really showed a preference for jigs and minnows presented by drifting instead of back-trolling.

That theory appeared to be proven when the wind died, the north side of the lake went flat and I was forced to begin trolling again; the action slowed way down up north. The breeze was manageable, so I motored back to the east side, where there was still a little chop on the water. We began a controlled drift there and began catching fish again.

The action was better, but the problem we found on the east side was that most of the fish were small. We caught numerous 10-to-12-inch fish, but only hooked a couple of better size ones and when we did, they got off the line. We were still hoping to harvest 3 more walleyes, but at that point, the time deadline was looming; “4:00 PM and we’re done, no matter what.” Bill had already told me.

One last stop, not far from the river mouth, at 3:30 PM yielded the final 3 fish we wanted. The clock said 3:57 PM and we packed up our gear and headed for the landing.

My post game wrap up is that I think the action was good enough to call good but fell short of the great action that can often occur at this time of the season. Walleye patterns on Red Lake appeared to mirror what I’ve seen on the other lakes I’ve fished, “scattered but biting.”

Lindy Live Bait Jigs, 1/8 ounce tipped with either fatheads or shiners was the only presentation we used yesterday. But I saw some fish caught by folks trolling too, so I wouldn’t rule out using crankbaits or spinners to bag walleyes. The bulrushes up north that I mentioned earlier were holding some northern pike, so that might be something fun to test out too. We were bit off several times in that area, but a friend of mine reported catching a 31-inch fish close by. Maybe casting spinnerbaits or spoons would produce some good pike action.