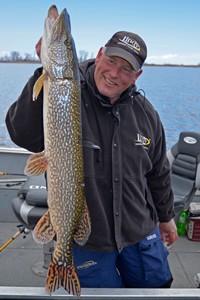 Lake of the Woods is long known for its spring runs of Walleye and Sturgeon. In recent weeks, social media pages were filled with photos from thousands of anglers showing off the results of their float along the Rainy River.
While most of us paid attention to reports about Walleye and Sturgeon moving up the Rainy River to spawn, there were a few sneaky anglers paying attention to another, lesser known spawning run.
Northern Pike, as always, are the first fish into shallow water spawning territory. Moving under the ice, they slip into shallow water bays and small feeder creeks weeks ago. For them, the spawning run is old news, they’ve recovered and their new plan is finding food along the path back to open water.
For savvy Northern Pike anglers, now is the time to set up an ambush.
Locating prime territory on Lake of the Woods isn’t that hard, get started by checking your map for bays that connect to the big lake. Avoid bays that “dead end” and look for fingers that lead into tiny feeder creeks that have flowing water. Most often, it’s these small streams of flowing water that host Pike during their spawning period.
Likewise, the flowing water in these small creeks attracts Suckers, along with other baitfish and if you’re a hungry Pike, this plays right into your hand. As Pike move out of the creeks and toward open water, they feed on the fish that are just now moving in.
Locating good fishing spots reminds me of searching for spring Panfish. Locating small stretches of deeper water can be helpful, but Pike don’t necessarily depend on deep water for feeding. For me, the best areas often feature a disruption of habitat, anything that differs from the expansive areas of shallow, muddy bottom terrain.

Patches of gravel or hard sand located amidst these muddy flats provide easier ambush points for Pike. So do patches of Bulrush, Cattail and sunken branches. Any object, breakline or shoreline feature that provides a Pike with a hiding spot is worth checking out.
Presentation most commonly involves anchoring the boat and still fishing with large minnows, either dead or alive and suspended under a float. I’ve seen some anglers use “quick set rigs” to present large minnows. The quick sets are fabulous for ice fishing, but when you’re casting them, they can be somewhat cumbersome. Using a 3/0 or 4/0 Octopus style hook works well too and there are some folks like circle hooks too.
For me, a rigging a Thill Big Fish Slider that will float an egg sinker weighing 3/8 ounce is just right. I tie on my slip knot on the line first, then slip on the float, then slip on the egg sinker and finally tie on a snap swivel. I have the hooks tied on 12 to 18 inches of 17-20 pound fluorocarbon line. I like the fluorocarbon better than steel because it doesn’t kink as easily and most of the time, Pike are hooked in the corner of their mouth. Bite offs are not a prevalent as they can be during warm water when fish are more aggressive.

Although most anglers pursue the post spawn pike using bobbers. I have had some success casting artificial baits as well. As long as they fish slowly, most any artificial lure could be a candidate. But one presentation that stands out is the use of large swim baits.
YUM’s 5 inch, White, Shad or Clown Color Money Minnow stands out for me. These large swim baits can be retrieved ultra-slow, but still have a lot of action. Control your depth by changing the weight of your jig and by varying the speed of your retrieve. It took me a long time to understand that there is no such thing as a retrieve that’s too slow, creep the lure along, a foot or two below the surface and hold on tight.
Timing your trip depends a lot on spring weather and the advancement of other species’ spawning. But typically, the period between the last week of April and the first week of May are in the ball park. Colder weather extends the time frame, warmer weather contracts it.
For me, “hitting it right” doesn’t mean catching a hundred fish. It’s the thrill of pursuing large Pike that intrigues me. These days, finding good populations of nice Pike is tricky; but Lake of the Woods definitely still has them.
So if you’re like me, suffering from cabin fever and want a chance at whopper Pike, then a spring trip to the big lake could be just what the doctor ordered.