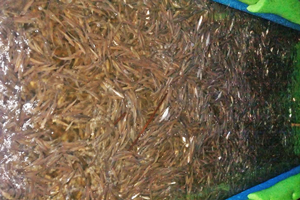 Upper Red Lake shiners, according to my friend, professional shiner trapper, Chad Benson, began their full-scale spawning migration the day before yesterday, May 18, 2020. The accompanying photo of his shiner haul that afternoon was all it took to get me fired up about heading there for my first offical workday of the 2020 fishing season.

I hooked up with my crew at the Winnie Trading Post at 8:00, picked up some bait and they followed me to the landing at Washkish. By the time we arrived, about 9:15 AM, the parking lots on both sides of the bridge over the Tamarack River were filled. There was still room in the overload lot, the sand lot adjacent to the main landing, but that was filling too.

What we learned on the lake was that even if the bite wasn’t “on fire”, Upper Red Lake was at the very least, a reliable place to gather walleyes for a fish meal.

Surface water temperature in the Tamarack River was 58 degrees and by the time we floated into the main lake, decreased to 54 degrees. For the rest of the day, my Humminbird registered temperatures between 53 and 56 degrees. Any warm water temperatures were diluted by being blown out to sea by strong southeast winds.

The same winds encouraged us not to stray far from the southeast corner of the lake and most folks did the same thing. That meant finding places to fish “in private” wasn’t easy. There were boats strung out all along the shoreline and as usual, concentrations of folks wherever and whenever anybody located a school of active fish. Still, there was room to move around, so it didn’t take too long to locate a workable stretch of water.

For me, the secret to finding early season fish on Red Lake is usually to figure out where there are schools of shiners heading toward the shallow sand. On Tuesday though, there were minnows everywhere, in fact, I saw bait on my graph all day long. That made it tricky to decide when to stop the boat, so instead of searching for a spot-on-a-spot, I just started trolling, knowing that eventually I would stumble into a school of fish.

It took a little while, but within a reasonable time, we did encounter fish. Typical of early season fishing on Red, the bite was slower in the morning and better during the warm part of the day. We probably caught 10 fish before noon, had a flurry of fast action between noon and 2:00 PM. The lull in the action was probably only the result of fishing pressure and boat traffic because when I moved to fresh territory, the bite picked right back up again.

On a lot of days, locating fish and then anchoring the boat to fan cast a jig and minnow, or throw out live bait under a slip float is a great idea. On Tuesday though, I could never decide where I wanted to stop. The fish were more scattered than usual and I never felt like I had them pinned down.

That’s probably because the water is high on Red Lake right now, it’s at least a couple of feet higher than what I’ve been accustomed too. It’s likely that the high water is a contributing factor to the shiners being so scattered along the shoreline. Since the shiners are scattered, there’s no reason for walleyes to concentrate in any one spot over another. For me, that meant having a slower-but-steadier bite instead of an intense, localized one. 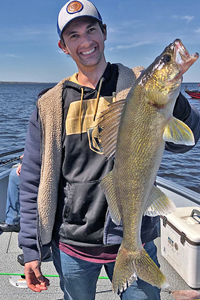 It should be noted too that for a long time, fish were located deeper than usual, 8 to 10 feet deep at the base of the breakline. Eventually they moved up, the breakline from 6 to 7 feet lit up during the afternoon. So don’t get too hung up on any one depth, move up and down occasionally, just to be sure that the fish didn’t shift position.

For me, there’s no reason not to fish with anything except a jig and minnow. It is by far my favorite presentation. A 1/8-ounce Lindy Live Bait Jig tipped with shiners until we established that fatheads worked just as effectively. There are certain lakes where having shiners is a big advantage, but Red Lake is not one of them, good size fatheads, rainbows or most any other minnow are all effective on this lake.

I'd heard from some folks that getting "keeper size" walleyes was tricky this year. There definitely are more large fish than usual, but I didn't find it super difficult to get keepers in the mix. That said; there are a lot of 16-7/8 inch walleyes, just below the 17 inch threshold. That’s important this season because we are only allowed one walleye over 17 inches and it would be easy to make a mistake.

So if you do head up there, just make sure all your ducks are in a row, DNR Enforcement is active on the lake and it is highly likely that you will be checked. Measure twice and be sure to pinch the tail to be sure that the CO can’t make it stretch to 17 inches, that would result in an uncomfortable situation.

It might take a little longer to fill your creel, but like I said, Upper Red is a reliable place to gather walleyes for a fish meal. Besides, who doesn't love catching a big walleye occasionally?

Most everybody appears to already know that Red Lake is good right now and traffic on the lake is brisk. But don't that scare you away, folks know what they’re doing these days and despite the robust crowd, loading and unloading boats went very smoothly. In fact, we were on the water just a few minutes after our pre-trip preparation was completed and getting off the lake was equally easy.

Helping your fellow fishermen and women stay abreast of fishing conditions in your area is good for everybody and it's easier than you think!

You don't have to write a book, you don't have to share your secret fishing spots and you don't even have to mention your lake. But even a few words about general trends, seasonal patterns and local weather conditions can really help.

Fishing Reports Minnesota, the Facebook counterpart to this page is open to the public, so you can post your own fishing update or just share a photo of a nice catch. Be like me, become a duly deputized "Cub Reporter", it's good for fishing! Contact Us